Paternity fraud has been in the news lately in a big way. In the UK, nearly half of DNA tests in contested paternity cases confirmed a man was not the biological father of a child. In Jamaica, one clinic had rates of 70 percent! But let’s not get ahead of ourselves.

The data does not suggest that 50% (or 70%!) of men aren’t the biological fathers of their alleged children. It means that rates are high among men who already have a reason to doubt.

To look at things in a different way, half of the UK men who thought they weren’t fathers turned out to be W-R-O-N-G.

What does that tell us really?

People should listen to their instincts but double-check with the help of science before making any life-changing decisions. DNA tests are readily available. Put them to work before you hurt your relationship with your child.

So, what should you do if you don’t think you’re the father?

It’s no surprise so many men react to pregnancy news with doubt. Many moms can’t believe they’re pregnant either. They were using birth control or didn’t believe they were fertile. Others just didn’t take the risks seriously. If a baby isn’t planned, it’s easy to start to panic, and the easiest way to keep your life from being turned upside down is by not being responsible for the problem.

Your family might have a heavy hand in exacerbating those doubts. Why? Because they want the best for your future. An unexpected pregnancy can derail education and career goals. They can make life complicated instead of care-free.

Fortunately, you don’t have to rely on instinct or gossip. DNA tests can safely be administered during pregnancy and after the birth of your child.

How to Test for Paternity Before a Child Is Born

A Non-Invasive Prenatal Paternity test (ridiculously called a NIPP test for short) is 99.9% accurate, can be performed anytime after the eighth week of pregnancy, and poses the same miniscule risk as any other blood test. According to the American Pregnancy Association,the average cost is $1,400, which may be covered by insurance, and even if not, many clinics have payment plans available. And in any case, it’s way less expensive than proving or disproving paternity after the birth, which may involve expensive lawsuits, the district attorney already trying to collect child support, etc..

While much more invasive than a blood test, an amniocentesis can also be used for prenatal paternity testing, however you would only choose this over a blood test if the amniocentesis is already being done. This procedure requires a sample of amniotic fluid collected during the second trimester of pregnancy. Because there is a slim risk of harm to the mother or baby, a doctor’s approval is required. Another invasive test useful in determining genetic problems or paternity, Chorionic Villus Sampling (CVS), can be performed a few weeks earlier than an amniocentesis. If a woman is already having an amniocentesis or CVS performed for genetic purposes, the tests present a much more affordable option than a non-invasive prenatal paternity test, ranging from $400 – $2,000.

Some people will tell you a mom only refuses a prenatal DNA test when she knows you’re not the father. The truth? It’s common for a pregnant mother to:

and to refuse a request even if the result would be positive.

Sometimes an effective request starts by asking a woman for a prenatal DNA test in order to stop gossip. Another way to smooth the way to a “yes” for a prenatal blood test is to tie it to prenatal support: for example saying something like “I really want to be there for you and the baby, and I’m prepared to start supporting you even before the birth if we can determine with certainty that we are both the parents.” Yes, of course you know she’s the mother, but this way it’s not about you, it’s about “us”.

Unfortunately, if she says no, most judges will not order a prenatal paternity test. There are exceptions, but most jurisdictions don’t recognize the results. In order to establish legal paternity and parental rights, another legal DNA test must be completed after the birth of a child.

There’s little room for maternal doubt when a woman is carrying a child. A man doesn’t have the same luxury. That doesn’t mean there aren’t ways of finding out who the father is before a child is born. A non-invasive prenatal paternity test can save you thousands of dollars and months or years of stress without posing any significant risk to mother or child. 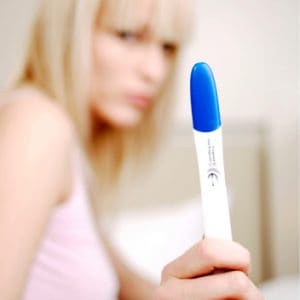 Should Men be Able to Decline Paternity During Same Period that Women Can Get an Abortion?

People helped by this information: 1,129