Lap, floor or ladies’ room? You know what we mean. Where was the last place you changed your baby’s diaper in public?

For too long, single dads have complained about a lack of changing stations in men’s restrooms. Men with partners can pass that task along to their wives and girlfriends. When you’re on your own, that’s not an option. It comes down to which risk you’d rather face.

Why There Aren’t More Changing Rooms in Men’s’ Restrooms

One of the first justifications you hear for this crime against humanity is that drug users will use the changing tables.

It hasn’t stopped businesses from putting changing tables in women’s bathrooms. There hasn’t been a rash of children being affected by drug residue from those tables either, despite a 2011 study that showed 92 percent of changing tables were contaminated with cocaine residue and a viral post in 2018 pointed out the black smudges on changing tables were likely from heroin users’ cooking spoons.

Of course, as most changing tables are in the ladies’ rooms, what does that say?

Some companies have made an extra push to install changing tables in mens’ rooms, but still, over 90 percent of dads say they’ve had to go without. While we continue to advocate for more changing tables, there’s something simple that single dads can do to make their lives easier right away.

There are several different models of mobile changing stations available online. Some are changing pad-bag combos. Others fold up into a small bag you can store in your larger diaper bag. Unfortunately, they don’t provide enough padding or security to change your child on the floor.

Portable bassinets aren’t much more expensive. Many also double as a diaper bag and are waterproof, so it’s easy to wipe them down quickly after a diaper change is over.

More Mobile Changing Options for Dads on the Go

As convenient as baby products can be, you don’t need a specialty item for safe, convenient diaper changing. You probably have all that you need already. The next time you’re in a pinch, try the following options:

– Change your baby in the trunk of your car. Many trunks are the right height, have plenty of flat space and are sheltered from the eyes of strangers.

– Recline your stroller. Many parents never use this option, but a full recline creates a flat space where you’re able to spread out a bit while also providing adequate cover. Just make sure to park it in a location where odors won’t disturb bystanders.

– Ask an app. There are a handful of mobile apps now (Diaper Changing Station Finder, KidzOut and others) that track locations of dad-friendly changing stations. If you’re at a restaurant or store that doesn’t have one, you might be surprised to find that there’s one just a few doors down. You can also check ahead of time and reward businesses for keeping single dads in mind.

Single dads face complications when changing diapers on the go. Don’t let that be an obstacle to going places with your child. Use these tips for happier, less stressful outings, and please leave your own diaper change tips below. 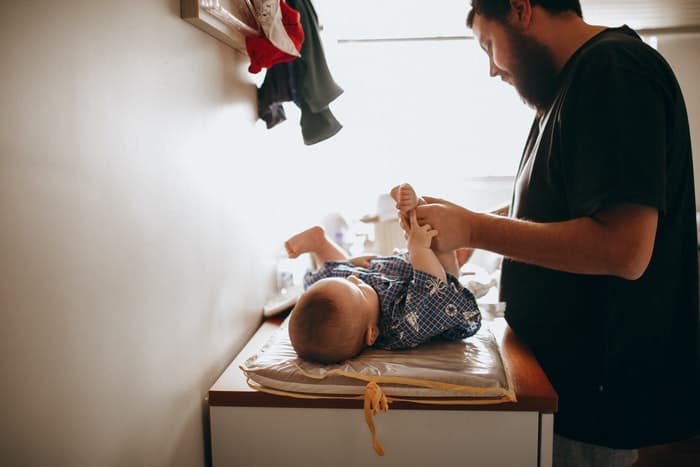 Article Name
Single Dads vs. Diapers: The Best Ways for Dads to Change Diapers on the Go
Description
Single dads face complications when changing diapers on the go. Don’t let that be an obstacle to going places with your child.