According to the NOW website, they are for “Equality in pay, job opportunities, political structure, social security and education,”, in the form of a constitutional equality amendment. “Although we did not succeed in ratifying the Equal Rights Amendment, winning a constitutional guarantee of equality for women remains one of NOW’s top priorities.”

But, as gender feminists, what that “equality for women” means, at least in some aspects of society, is that women are somehow more equal than men.

Nowhere is this more true than in the area of family law.

While some may find it hard to believe, NOW actually issued a war cry against fathers’ rights, and they did so very publicly. Originally issued back in the mid-90s, it remained on their website until as recently as just a few years ago.

While that information has now been hidden, and the public page on their site now 404s, through the magic of archive.org, the 2014 version of it persists.

Here’s what it says:

WHEREAS organizations advocating “fathers’ rights,” whose members consist of non-custodial parents, their attorneys and their allies, are a growing force in our country; and

WHEREAS the objectives of these groups are to increase restrictions and limits on custodial parents’ rights and to decrease child support obligations of non-custodial parents by using the abuse of power in order to control in the same fashion as do batterers; and

WHEREAS these groups are fulfilling their objectives by forming political alliances with conservative Republican legislators and others and by working for the adoption of legislation such as presumption of joint custody, penalties for “false reporting” of domestic and child abuse and mediation instead of court hearings; and

WHEREAS the success of these groups will be harmful to all women but especially harmful to battered and abused women and children; and

WHEREAS the efforts of well-financed “fathers’ rights” groups are expanding from a few states into many more, sharing research and tactics state by state; and

WHEREAS many judges and attorneys are still biased against women and fathers are awarded custody 70% of the time when they seek it per the Association of Child Enforcement Support (ACES);

THEREFORE BE IT RESOLVED that the National Organization for Women (NOW) begin a national alert to inform members about these “fathers’ rights” groups and their objectives through articles in the National Now Times (NNT); and

BE IT FURTHER RESOLVED that, as a part of this alert, NOW establish a clearinghouse for related information by sharing with NOW state and local Chapters the available means to challenge such groups, including the current research on custody and support, sample legislation, expert witnesses, and work done by NOW and other groups in states where “fathers’ rights” groups have been active; and

BE IT FURTHER RESOLVED, that NOW encourage state and local Chapters to conduct and coordinate divorce/custody court watch projects to facilitate removal of biased judges; and

BE IT FINALLY RESOLVED, that NOW report to the 1997 National Conference on the status and result of this national alert whereupon its continuation or expansion will be considered.

The sublink to the section that contains the “Action Alert on “Fathers’ Rights”” is the sixth sublink down. Note that the quotation marks around Fathers’ Rights are theirs, not ours.

Mind you, this ‘proclamation’ and declaration of war on fathers’ rights was a public document on the NOW website for nearly 20 years; while the page has been removed, no retraction nor a statement of reversal of their policy has ever been issued. 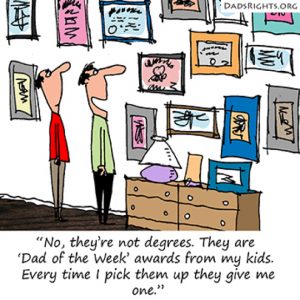 People helped by this information: 4,495