As Covid closed down businesses across the country, researchers noted a confusing trend. Even in households where women were earning more than men, moms were choosing to leave the workforce to look after their children. But in some situations, the practical constraints of the pandemic forced families to confront the social bias against fathers that has lasted for decades.

Six percent of single fathers also lost their jobs due to the coronavirus, say experts, while many men transitioned to remote work. Others chose to leave the workforce to focus on childcare while their wives remained in essential positions in hospitals, pharmacies, and nursing homes, where women make up 78 percent, 70 percent, and 89 percent of the workforce respectively.

Many of the dads who are now staying at home with the kids are also juggling full-time work responsibilities.

Chris Murdock, 42, from Nashville, Tennessee, has been looking after his 7-year-old daughter during the day while running the company he co-founded in 2009, IQTalent Partners. The executive search firm lost enough clients to furlough two-thirds of their staff, but Murdock has managed to keep it in business. To do that meant going without a salary, making his wife’s job as a pediatric specialist even more important for their family.

Chris McGilvery, 35, of Canyon, Texas, has taken over parenting responsibilities as well while his wife, Taryn, finishes her residency. The McGilverys were already counting on 2020 being a bit upside-down, but the extra challenges of the coronavirus have put a spin on things. McGilvery works remotely as an online course designer, one of the few non-medical professions which has seen demand increase over the last six months.

They join an established community of stay-at-home, often work-at-home dads who are married to doctors. Curtis Webster, Jr., 38, started the Dads Married to Doctors group in 2014. It now has tens of thousands of members, who’ve leaned heavily on one another during the pandemic.

There are options for other men who need a break from the isolation. Groups are appearing on every major platform, from Facebook to Reddit, to support dads who are now at home. Their best advice for newbies?

Attitudes toward gender roles will continue to change as communities learn how to deal with the pandemic. With it comes hope. The more men tackle the responsibilities of fatherhood at home in absence of mothers who are stuck on the job, the more courts should recognize the importance of men in their children’s lives – not only in regard to their own families but on society as a whole. 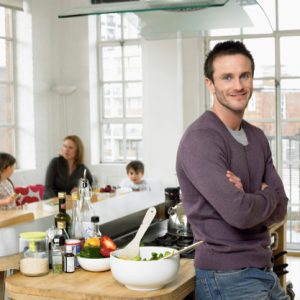 Letting the Kids Stay in the Home While the Divorcing Parents Move In and Out. Is it Realistic?

People helped by this information: 822