In the face of the tireless fight to see fathers as a vital presence in their childrens’ lives, it’s important to not let subtle shifts, as they’re often signs that the movement is finally picking up pace, and making room for change. This year, many in the UK noticed, for the first time ever, something new on the shelves in time for Mothering Sunday; cards for dads.

Mothering Sunday is often, and sometimes controversially, compared to Mother’s Day in the US. Mothering Day’s roots are steeped in religion, with “mother” referring to the “mother church.” Observing Mothering Sunday eventually fell out of favor until 1913, when a woman named Constance Smith read about the campaign in America to acknowledge Mother’s Day. From there, Mothering Sunday’s original religious roots became conflated with the modern Mother’s Day roots, and can still be somewhat a bone of contention.

For the purposes of those who celebrate Mothering Sunday in a modern sense, the appearance of holiday cards for dads is a huge win. It acknowledges the rise in single parent families, not just for single mothers, but single fathers as well. It allows children of single fathers, whether due to divorce or being widowed, to celebrate the day by providing cards with sayings such as, “real dads buy tampons,” and, “two jobs, one very handsome daddy.” The line of cards, stocked by stationary chain Paperchase, also provides cards for single mothers on Fathering Sunday.

Even more poignant is the story behind the cards; they were created by artist Stevie Rowing-Parker, who was raised by a single mother. After losing his father at the age of five, he eventually began purchasing cards for his mother Maria on both Mothering Day and Fathering Day. On Fathering Day, he’d buy a father’s day card and cross out “dad” to replace it with “mum.” Eventually this led to the idea of offering cards to single parents on both days.

While it may seem like the movement to obtain the recognition fathers so clearly deserve is slow, examples like this show us that those who have been raised seeing and hearing those messages are reaching a point where they can use their voice and influence. These subtle movements, while seemingly small, are powerful in numbers, and go a long way to gradually changing public perception by normalizing dads as an equally important influence in the lives of their children. To read more, visit the Telegraph. 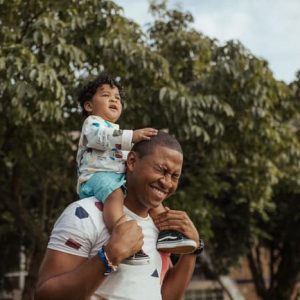 People helped by this information: 829